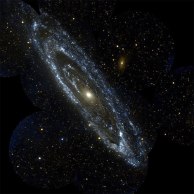 In following up with my previous post on God creating the universe, let me say that I am always excited whenever I am in a conversation with a skeptic who is willing to admit, that the universe began to exist.  However, there are still those out there that are still taking a blind leap to believe that the universe has always been, and did not have a beginning to its existence. When I ask them about Sir Edwin Hubble’s telescope about half of them claim that they haven’t given it much thought. The more educated academic skeptic will admit that Hubble made some great discoveries, and probing deeper we may hear in the background “hubble hubble toil and trouble, red shift glows and radiation afterglow bubbles.“

The reason for keeping the skeptics’ hope for an eternal universe though, comes from the likes of Carl Sagan, and his self defined successor Neil DeGrasse Tyson who carried the torch of Sagan and revived the program, on PBS/Fox respectively called “Cosmos.”  If you go back as far as I do, you might recall the opening line, “The cosmos [universe] is all that is, or was or ever will be.”  According to this view held by many pop skeptics, it is stating that the cosmos (vis-a-vis the universe) had no beginning. If the universe had no beginning then what is the need for a Beginner is their thinking?

But this contrasts the findings of the Hubble Telescope and the Bible, which opens up with the words, “In the beginning God created the heavens and the earth” (Genesis 1:1).  In this posting, I hope to share with you a few arguments for why I believe that Sagan and Tyson are wrong and that the universe does have a beginning.  By presenting these arguments I believe we will find good reasons for God’s existence.

The first argument for the universe having a beginning and thus pointing to the existence of God is an argument that has been revived and championed by Christian debater, Dr. William Lane Craig; known as the kalam cosmological argument.

The argument goes as follows:

Premise #1: Everything that begins to exist has a cause.

Premise #2: The universe began to exist.

Conclusion:  Therefore, the universe has a cause of its existence.

An Explanation of the Kalam Argument

When we look at the first premise, we see that it affirms the undeniable law of causality, also known as the law of cause and effect. The law of causality simply states that every material effect must have an adequate antecedent or simultaneous cause.

Speaking to the second premise, allow me to point to a few arguments that rise within this premise. One of those is philosophical and the other two are scientific. (That’s right, Christians should not be afraid of science when speaking atheists who want use science to try and debunk religion in general and Christianity particular.)

Reinforcing the second premise of the kalam argument, let’s start with the philosophical argument,

Conclusion: Therefore there must have been only a finite (limited) number of moments before today, therefore showing that the universe had a beginning.

A second argument relates to what is called the second law of thermodynamics which states that the amount of usable energy in a closed system is running down (becoming more disordered or chaotic). But if the universe were eternal and “running down.” this brings forth a contradiction that the universe has been in a constant state of running down and yet has not done so. If the universe is getting more and more disordered, it cannot be eternal, or else it would be completely disordered by now. As we can see that this is not the case.  Therefore the universe must be finite in its duration.

The scientific discipline of astrophysics has confirmed that there was a time that the universe did not exist, but then came into existence from nothing.  This is what Christian theologians and philosophers call creation ex nihilo (creation out of nothing).

The universe must have a cause. Its beginning from nothing must have come about by means of something outside itself.  That cause must be spaceless and timeless because both space and time began to exist when the universe began.  To add to this, that First Cause of the universe must be eternal (not bound by time) and without cause because an infinite series of causes is impossible. The universe itself cannot be self caused (be its own cause) because it is temporal, changing, finite and science shows us that it had a beginning.

Rob is a blogger, writer and public speaker on a mission to equip the believer to think and articulate what they believe and to communicate the message of the gospel to a confused culture in a confused, chaotic, “brave new world.”  He is available to come and speak to your church, college club, or group. Find out what people are saying.

If you would like to book Rob for a speaking event, you can do so by emailing him at roblundberg@ratiochristi.org    If you have other questions about apologetics or doing apologetics, or if you are looking for apologetics resources, contact our ministry by email.