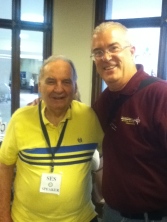 Having a job that takes away lot of time from my passion can make a tribute like this a little late for my liking. And I am thankful that I get to write while being away on the road and not having to fight for the time to share from my heart the impact that a “spiritual giant” has made in our ministry.

But no one in the thirty nine years of being a believer has impacted the ministry the Lord has given me like Norman Leo Geisler.  In fact, if you look at the legacy of this giant of the faith, no one in the last 50 years has fought the defense of the resurrection, the inerrancy and the overall truth of the historical Christian faith more than Dr. Norman Geisler!

On July 1, Dr. Norman Geisler graduated to his eternal reward.  Dr. Geisler was a prolific writer, teacher, and seminary founder, died at the age of 86. Dr. Geisler has been an influential apologist for decades. Geisler earned his PhD in Philosophy from Loyola University; his MA in Theology from Wheaton College; his BA in Philosophy also from Wheaton; and a ThB from William Tyndale College.

His books are numerous books over his lifetime to include Christian Apologetics, Worlds Apart: A Handbook on Worldviews, Chosen but Free, Systematic Theology, I Don’t Have Enough Faith to Be an Atheist (w. Frank Turek), Making Sense of Bible Difficulties, and a revised of his last book When Skeptics Ask: A Handbook on Christian Evidences. Dr. Geisler was a staunch defender of biblical inerrancy beginning with his participation in the formulation of the Chicago Statement on Biblical Inerrancy. Dr. Geisler’s passing leaves behind substantial challenges for future generations of the church.

How I Learned of Dr. Geisler

I became a Christian in 1980, and one of the first books I read was Josh McDowell’s evidential tome, Evidence that Demands a Verdict (2 volumes), which helped me understand and reinforce the need to present evidence to people who are and were skeptical like myself.  Then there was the late Dr. Walter Martin, author of The Kingdom of the Cults, who explained the need to present the gospel to those embracing cults.

Dr. Geisler’s ministry, even after his homegoing, will continue to ripple through out the annals of Christian history.

He Shaped My Understanding of Modern Apologetics

Before I encountered anything written by Norman Geisler, my thinking of apologetics was much along the lines of the creation / evolution debate and the response to cults.  But I first encountered Norman Geisler, when I stumbled on his Christian Apologetics book in the local Christian bookstore. It caught my attention having read books from Josh McDowell and Walter Martin.  So I purchased it and began reading.

When I purchased the book, as an undergrad student at Oklahoma Baptist University, my friend at the counter told me that I was sadistic. That was because of the depth of Dr. Geisler’s presentation of the Christian defense in the book. Contrary to the so-called sadism that some claimed, what I found was a whole new world of thinking on worldviews that I never even thought about.  Interestingly enough, that same book would become the textbook for my Christian Apologetics course that I took in seminary, in the 90’s.

This later would turn into the Twelve Points that Prove Christianity True:

This argument would become the backbone for his book with Frank Turek, I Don’t Have Enough Faith to Be An Atheist.

Add to this the times he came with other speakers to Camp of the Woods in Speculator NY and listening to the tapes over and over again, Dr. Norman Geisler became probably the greatest influence to show me that there was more to apologetics than Ken Ham and the popular creation versus evolution debate.

My First Meeting With Dr. Geisler

The year was 1995 and I had just become a member of the Evangelical Theological Society, attending my first annual meeting.  The meeting was in Philadelphia, and the subject for the sessions was on apologetics. At this meeting you had apologists from all over the globe. John Warwick Montgomery, Greg Koukl in his early days, Greg Bahnsen, William Lane Craig, J. P. Moreland and Norman L. Geisler.

I would be in a paper reading session that I first encountered the graciousness and the tact of Dr. Geisler. William Lane Craig was reading a paper on Wayne Grudem’s new systematic theology. The subject was on the “Timelessness of God” which Dr. Craig was supporting. At the time of the Q and A after Craig’s paper was read, Dr. Geisler stood up and expressed that God is not “timeless” but “eternal.” To call God timeless, places him within the spectrum of time, but He is outside of time (transcendent); hence He is eternal.

At that response to the paper I was like in total awe watching  the other apologists in the room discussing this point that Dr. Geisler raised.  At that moment I could not wait to find out when Dr. Geisler was reading his paper, but that moment would soon come.

My first face to face meeting was in the breakout session where he read his paper, and had been reading the same paper for the last three years, on the subject the Battle for the Resurrection. You see, the resurrection of Jesus was my favorite subject (and still is) due to having examined the evidence before my conversion in 1980.

Attending his breakout session was awe inspiring for me at that time, but at the end of my hearing his reading of the paper, I had the privilege to meet him personally. In that short transitionary between session visit, I had the opportunity to ask him why he kept reading the paper at the previous two years’ meetings.  Dr. Geisler was very gracious in his response.

He shared with me that he was responding by asking me if my wife and I had children. I responded with a “No.” And he graciously shared that he was responding like a parent would to children who continued to misbehave and not taking a particular action. When I asked for clarification, he stated that Dr. Murray J. Harris was on faculty at Trinity Evangelical Divinity School (TEDS), which he was on faculty with Dr. Geisler at that that time, and Harris was  interpreting the glorified body of Jesus as a spiritual body.

Although my wife and I had not been blessed with children I understood that Norm reading of the same paper for the last three years was addressing TEDS’ stubborn inaction to call for Harris’ resignation or dismissal.  In Dr. Geisler’s mind, TEDS would have to apologize to the Jehovah’s Witnesses, if it were to continue to accept Harris’ view on the resurrection body of Jesus.

From that meeting on, knowing what Dr. Norm shared, I believe his book, “The Battle for the Resurrection” is must have for every Christian library as well as books as his co-authored serieses, When Skeptics Ask, When Cultists Ask, When Critics Ask; and a little known elementary apologetics book, Living Loud: Defending Your Faith, co-written with Joe Holden.

A part of the army of apologists, I started seminary in August of 1991 at the Northeast Branch of Mid America Seminary. Dr. Geisler along with Ross Rhodes were the founders of Southern Evangelical Seminary in 1992 for the proclamation and the defense of the gospel.  I first heard of the SES National Apologetics Conference from my friend Pastor Ben Gibson, who attended one of the first conferences that would continue to be many that would follow. Ben came back raving on how wonderful it was and how necessary a seminary like SES was in the day in which we lived. That seminary and the National Conference on Christian Apologetics are the legacy of Dr. Geisler.  Those who has trained through his class lectures, his books, his breakout sessions, his debates, and his other writings are his legacy.

For those of us who may not have sat in classes under Dr Norman Geisler’s, we do not know him like those who directly interacted with him daily. They testify of his graciousness and love the Lord and his students.  As one, who indirectly and directly sat under him though his books and attending seminars, plenary and breakout sessions, he had a great impact on my life and ministry.

As I close this out, his short outline on the necessity of apologetics echoes in my mind, and I know that it will remain with me all my life, as I seek to carry forth his legacy wherever I find myself.  I remember hearing him say about apologetics that, “Scripture commands it, Reason demands it, Culture cries for it and The results attest to it.”  Oh how I wish the church and pastors would listen to this great giant of the faith! We need apologetics more than ever in our churches as the new discipleship and evangelism.

I believe it was the current President of SES Richard Land, speaking on his graduation into Heaven, put it this way,

“I have no doubt he has heard the words he was born to hear, ‘Welcome to thy inherited cove, thou good and faithful servant, you were faithful in a few things and thou has inherited many things!’ You will be missed Norm!”

I echo these words as part of the army of apologists seeking to carry forth his legacy.  Dr. Geisler, you will be surely be missed, by your friends, colleagues, and even those you debated. But one thing you exhibited that I will always remember: your love for our Lord, your love for your students and the graciousness you demonstrated to those you visited with during the National Conferences.

And your words, Dr. Geisler, are forever etched in our memories,

Nota Bene:   Read Bill Roach’s tribute to his mentor  “I AM PUT HERE FOR THE DEFENSE OF THE GOSPEL”—THE LEGACY OF DR. NORMAN L. GEISLER