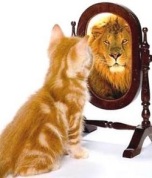 Thinking about how we come to know what we know (epistemology[1]), and seeing the condition of the church in America operating more on a level of feelings and experiential ministry, I am reviving a post, or should I say refreshing a post from the other blog, that I have moved from.

Someone once quipped, that culture today “listens with its eyes and thinks with its feelings.” With the Millennial and Gen Z generations reinterpreting their self-identification in their identity, we see the church having its work cut out for her in reaching the culture.  Suffice it to say, we are living in a culture driven by emotive self-identifications.

Take this kind of culture, and take the average believe having velcro’d static of the culture invading their lives; and then bringing it into the church, how can we turn the tide.

In this posting I want to address five caveats which surface from emotions based spirituality and living.

Caveat #1:  Emotions can be good or they can be bad.  They can be good when it comes to anger at sin or bad when the anger is manifested in things like bitterness. As with good things, emotions must be kiept in their proper context. But in our culture, we see feelings overstepping their God intended bounds because we put those feelings ahead of reason.

There are many ways that people determine truth, but emotions should not be one of them. Emotions also do not determine right from wrong.  Just because one feels good does not suggest that those feels are interpreting rightly that something is true.

The same is true about feeling bad determining something to be false. In fact, emotions contain no content, and no information by which to evaluate truth from falsehood. Our reasoning capacity performs that function.

Emotions are a part of the soul that appreciates and responds to life. Expecting them to identify truth is like asking your eyes to taste and your ears to smell. Each sense has their respective functions; and emotions and reasoning capacities are no different.

Caveat #2:  There are many religious groups that are dangerously dependent on emotions. Cult groups like the Mormon church are an example of a group that depends on emotions to think. The Mormon missionary will invite a person investigating their books to read the Book of Mormon and then ask God if it true or not.  This is moving a person to make an emotional decision or a decision based on feelings (aka a “burning in the bosom”).

Today, millions of people experience sincere contradictory emotions about their religions. Those viewpoints cannot all be true because each religion makes mutually exclusive claims about God, the universe, salvation and the nature of man. But that is another posting.

Caveat #3:  Some Christians come dangerously close to allowing emotions to guide their faith. Some believe that their faith validates the Bible or other truths to be true. Some believe that God speaks to them outside of His Word, even using audible voice to communicate. While this may be true, the test for truth and authenticity should not be based upon their feelings.  This is what is called fideism (having faith in faith). The most important thing is that what you believe is in agreement with God’s written Word, the Bible. Biblical historical Christianity does not ask people to make a decision or take action based on feelings.

Caveat #4:  There are also people today who make moral decisions based on how they feel. Emotions change, and cannot determine right and wrong any more than they can recognize truth or falsehood. According to the Word of God, some things that feel good violate God’s moral law. Things like gluttony, gossip and adultery may feel good to those who commit them, but they must be evaluated by God and His Word, regardless of one’s feelings.  This is where one must be master over their feelings or else they will find themselves a slave to them.

Caveat #5:  Emotions can also influence reason, but should not become a key factor in determining truth. When truth and falsity or right and wrong are identified, feelings can and should accompany the decision. Imagine being moved by the beauty of the Colorado mountains or the majesty of the universe.  Imagine the feeling of a child being birthed into the world.  What would it be like to not sense the awesomeness of these things? What would it be like to have no feelings like humility and gratitude for God’s work in your redemption (if you are a Christian).  Emotionless Christianity is closer to Buddhism, which teaches that one must shake away the passions. Folks, this is not what God has in mind. It is okay for the Christian to be passionate, so long as that passion is according to the propositional truth of the Word of God.

If we were ever to search for a person who modeled perfect emotional balance, it would be Jesus. Saul of Tarsus was passionate about killing and jailing Christians (Acts 7:59-8:1). Like the Jews before Jesus at His trial, his terrorist-like passion was not guided by the truth (Romans 10:1-2). After his conversion to faith in Christ, God redirected his emotional zeal. His redeemed conscience was impassioned to preach the Word of God with the same intensity as he exercised during his reconverted days.

As Christians, we need to follow the example of Jesus and the apostle Paul who used their emotions well by keeping them in their proper place. Our reasoning capacity should make decisions about truth and morality.  A redeemed mind that is well trained in the Word of God guides us in His path of truth. As the Psalmist has penned, “Your Word is a lamp to my (our) feet and a light to my (our) path” (Psalm 119:105).

[1] Epistemology is the study of knowledge and where it comes from and how we come to know what we know.